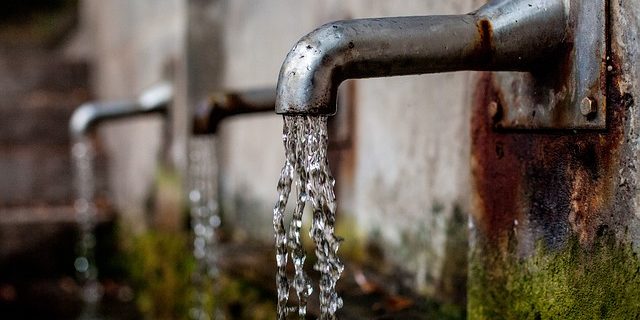 This former catch-phrase for the Olympia Brewing Company once described the purity of the artesian well water used to brew its beer. Today, it could just as easily be used to identify the culprit behind multiple health issues around the world. In the U.S. alone, contaminated drinking water is responsible for as many as 32 million cases of waterborne disease every year, according to the Center for Disease Control.

“The more we look for pollution, the more we’ll find,” writes National Geographic’s Rhea Suh, “and the list of contaminants is long: Coliform bacteria near dairy farms in Wisconsin. Nitrates from fertilizers in Iowa’s rivers. Lead, mercury, and uranium in fracking fluid in places like Ohio, Oklahoma, Pennsylvania, and North Dakota.”

In California’s Central Valley, farmworkers have to buy their own bottled water due to unsafe levels of arsenic and agricultural chemicals found in their tap water. According to a report from the nonprofit Environmental Working Group and Northeastern University, 43 states have sites with water contaminated by PFAS, a group of manmade chemicals used in various industries because of their ability to repel oil and water. Teflon nonstick products, stain and water repellants, cleaning products, food packaging and firefighting foams all contain PFAS. Two forms of the chemical are present at unsafe levels in the drinking water of six million Americans and found in the bodies of 98 percent of Americans.

A recent Newsweek story noted that the American Society of Civil Engineers gave the U.S. drinking water delivery system a ‘D’ grade on its infrastructure report card based on the high number of leaks and the presence of both legacy contaminants like lead and new threats like PFAS.

Contaminated water does not affect everyone equally. A combination of failing infrastructure, agency incompetence, and racial and socioeconomic bias, mean that those living in low income rural and urban areas, particularly people of color, are most at risk. The highest lead levels are often found in predominantly African-American communities such as Newark, Flint, and East Chicago. Between 9 and 45 million people got their drinking water from a source in violation of the Safe Drinking Water Act between 1982 and 2015, according to a new study, and of those, the most at risk were those who lived in rural, low-income areas.

By now the health impacts of lead poisoning are well-known, thanks in part to the water crisis in Flint, Michigan. Studies have concluded that lead poisoning can cause cancer, cardiovascular diseases and kidney damage in adults. Among pregnant women, lead exposure creates a high risk of stillbirth or miscarriage while in infants and small children, it can cause brain and nervous system damage, weakened immune systems, and even death.

But lead is not the only problem. Arsenic and agricultural chemicals found in drinking water have been linked to elevated risks of infant death and cancer in adults. Researchers have found links between PFAS exposure and potential adverse health impacts such as liver damage, thyroid disease, decreased fertility, high cholesterol, obesity, hormone suppression and cancer.

When it comes to treating water pollution, one method has been popular for decades because of its efficiency and affordability. Different forms of zeolite have been widely used to treat contaminated wastewater due to its ability to adsorb heavy metals and other substances. The mineral’s open-framework structure, large cavities and negative magnetic charge all make it an excellent and low-cost option for both wastewater treatment. “The use of natural zeolites in wastewater treatment is one of the oldest and the most perspective areas of their application,” say authors Karmen Margeta, Nataša Zabukovec Logar, Mario Šiljeg and Anamarija Farkas in Water Treatment.

A synthetic form of zeolite is also commonly used to filter well water because it can remove particles of metals like manganese and iron quickly and efficiently.

Aside from purifying wastewater, a soluble form of zeolite such as Vitality Detox Drops can also clean up the residue of contaminated water contained in the human body. One of the unique features is its size; many of the fragments are as small as chromosomes, which means they can permeate cellular membranes. Their honeycomb, cage structure and negative charge act as a magnet for toxins, binding them either within or to the outside of the cage. This effectively neutralizes toxins while they remain in your body.

Some particles are so small that although they get stirred up, they end up resettling or ‘retoxing’ rather than getting removed. However, the cage-like structure of soluble zeolite attracts them together, making them large enough to be passed through organs like the liver or kidneys. Because the drops are water-soluble, they can be easily eliminated, taking the toxins with them.

Soluble zeolite can help to address the health impacts of any contaminants in your drinking water. However, the problem is obviously much larger. If you have concerns about your drinking water, the Natural Resources Defense Council (NRDC) recommends the following steps:

Suh, Rhea “We Can’t Assume Our Water is Safe to Drink. But We Can Fix It.” National Geographic Magazine, March 219. Retrieved from:

Kounang, Nadia “What are PFAS Chemicals and What are They Doing to Our Health?” CNN, February 14, 2019. Retrieved from:

Rose, Joan. “Millions of Americans are Drinking Water that Could Be Dangerous.” Newsweek, May 29, 2019. Retrieved from:

Lindwall, Courtney. “How to Protect Yourself from Lead-Contaminated Water.” Natural Resources Defense Council, April 30, 2019. Retrieved From: